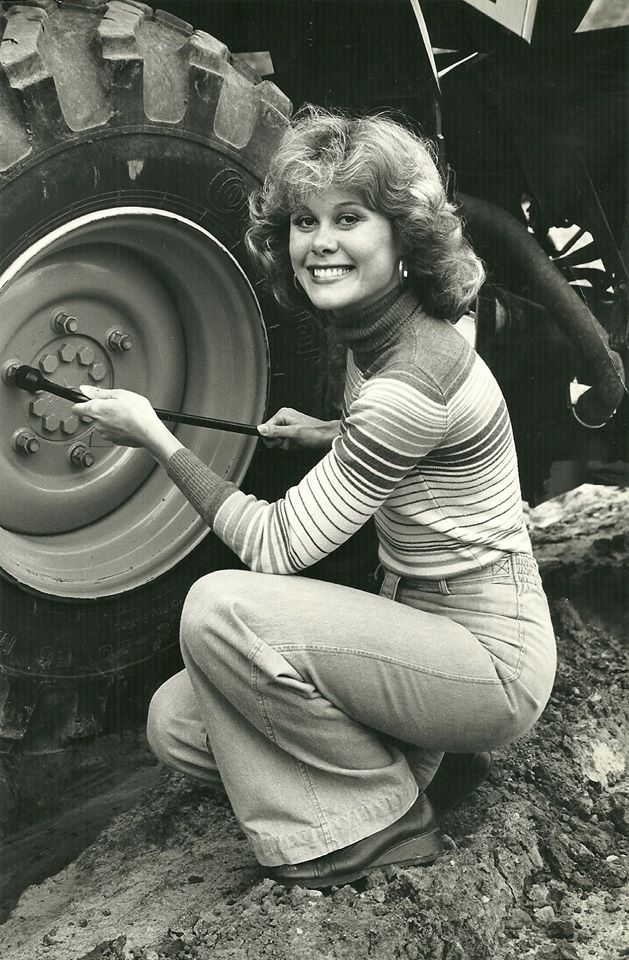 Well, here I am fresh-faced, big hair and bell-bottom jeans, pretending to change a tire on a Monster Truck for the “Meet Our New Editorial Assistant” section of Pickup, Van & 4WD Magazine. This was my first magazine job, circa early 1980s. PV4 was one of three other magazines published by CBS, Inc., based in Newport Beach, Calif. The others were: Road & Track, Cycle World and Sea Magazines. I would work for each of these publications in some capacity for the next six years.

But let me backtrack a bit. Previously, I had worked as Program Assistant to the Program Director at the ABC-affiliated TV station in my hometown of Huntington, W. Va. It was a fun and fascinating job, and I truly thought working in the television industry was going to be my lifelong career. But fate had other ideas, because my husband was offered a job in Newport Beach, Calif. So we loaded up the truck and moved to Beverly, errr, Newport Beach, LOL! Ironically, shortly after our move, a young unknown came to work at the television station. His name? Matt Lauer.

So obviously working with Matt Lauer was not in the cards. And because there were no real television stations to speak of in Orange County (they were all in Los Angeles, some 60 miles away), I had no idea where to work. I wandered one day into a building only two blocks away from our new apartment, resume in hand, mainly because that office building said CBS Publications on the front. I hoped that because I had worked for ABC, CBS (albeit, the publishing division) would consider me for a job. Well, evidently, they liked what they saw, because I was hired that day as secretary to the Publisher of Road & Track Magazine.

Three months later, Road & Track’s sister publication, Pickup Van & 4WD, was looking for an Editorial Assistant. I jumped at the chance to get this job, as I had always loved writing. In those days, if you got on as a writer, it was a real apprenticeship. Fortunately, I got the gig, and thus began my career in the fabulous world of magazine writing. As their Editorial Assistant, I had the opportunity to learn from some of the best automotive and enthusiast publication writers in the business. One of them was a former writer for the original Twilight Zone series, and because of my TV background, we bonded. Many evenings he regaled me with stories of his CBS-TV writing days with fellow writing mates: Rod Serling, Charles Beaumont and Richard Matheson.

But alas, the world of on-staff magazine writing is a mercurial one, and publications are bought and sold regularly. When my magazine was sold to Peterson Publishing in Hollywood, I couldn’t make the long commute. But that led me to find and work with a number of other national magazines, located right in Orange County. They included enthusiast publications, such as Street Rodder, Touring Bike and Custom Bike, as well as trade magazines: Dealernews, American Big Twin, and Watercraft Dealer. I worked my way up from Editorial Assistant to Assistant Editor to Associate Editor at these magazines, and finally to Managing Editor. I eventually landed a writing position with a magazine for the psychiatric profession: Psychiatric Times. There, I would spend the next six years, writing feature articles based on interviews with some of the top doctors in the nation (see “Portfolio”).

When my daughter was born during that time, I made the decision to freelance. Psychiatric Times let me make this transition, and I continued writing articles for them, however, this time as a freelancer. This transition allowed me to freelance for other publications, as well, including HR Magazine, a magazine for the Human Resources industry, and Entrepreneur. I also wrote a “How-To” business book for  Entrepreneur Media entitled: Start Your Own Home Inspection Business (see “Portfolio”).

The next 10 years were spent raising my daughter and helping my husband in his marketing business. Today, with my daughter grown, and the advent of the blogging world, I realized that through blogs, I could write about some of my personal passions and interests in life. What are these interests/passions? You only have to look at my “Portfolio” to see that I love blogging about food, restaurants and chefs. In addition, you’ll see that I am starting a new blog soon with my friend, Susi, encompassing the world of luxury real estate.

As you can see, I De’ Claire, have had an interesting and eventful career, and it continues today. This means you can benefit from all my experience. So, please take a moment and peruse my “Writing Services” section, and “Contact” information. Do not hesitate to get in touch with me regarding your writing needs. And, while you’re at it, please sign up for my upcoming “Newsletter.” It’s sure to be chock full of interesting information, insights, and tips!